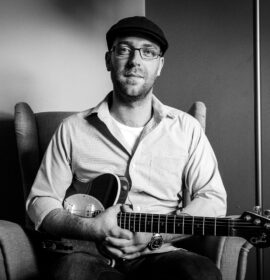 As of 2020, David has entered his 16th year of full time music tuition (both privately and in NSW State and Catholic School systems). David has been a guitarist since the age of 7 and began playing professionally at the age of 14. Having had the opportunity to be mentored by some of Australia’s best guitarists including Phil Emmanuel, Rex Goh, Brett Garsed, Steve Grieve, Rick Price and Ross Ward (of Wards Express), David is able to play seamlessly in a variety of styles ranging from Rock, Pop, Country, Jazz, Bluegrass and Rockabilly… and many more!

With career highlights including appearances on The Midday Show with Kerri-Anne Kennerley, regional NSW Sydney Olympic Torch Relay shows, performing alongside Australian singer-songwriter (and record breaking 7 Golden Guitar winner) Sara Storer, touring with some of Sydney’s best cabaret/impersonator shows as principal guitarist and performing in pit orchestras as lead guitarist with countless theatre groups across Sydney, David kept a varied and consistent work schedule always with a goal to find the next challenge and to “never stop getting better”.

With a speciality in understanding that all students are individuals, David is a master at creating tailored programs for students that examines their wants/needs so that every student is able to achieve their specific goals while having FUN!

David owns his studio in the heart of Drummoyne where all lessons are held in a professional studio with high quality equipment and 21st century technology.

We would like to introduce you to our “Free Consultation” service.

Choosing a new music tutor can be a tricky process so we would like to help remove some of the stress that goes with it. For all new clients, we would like to offer a FREE 30 minute consultation to discuss where the student is currently at with their playing, what they would like to achieve from lessons and how we can begin organising an individual lesson plan to tackle goals and aspirations.

Contact us now to learn more about our “Free Consultation” service.