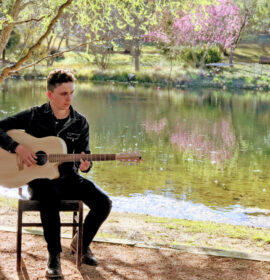 Ky Fisher Is A Contemporary Guitarist From The Hunter Valley Currently Working In Sydney. He Incorporates Elements From His Studies Into His Lessons, Studio Work And Guitar Repairs.
By Creating Custom Programs To Fit Each Student’s Goals And Lifestyle, Ky Ensures You Get To Where You Want To Be Without All The Fluff.

With a genuine interest in the diversity of music from around the world, Ky draws influence in his teaching methods from genres including rock, metal, pop, Cuban and flamenco. This developed through his time spent with luthiers in Granada, Spain; while playing and traveling with local musicians in Mozambique; while studying language at university in Seoul, South Korea; and extensive listening, and actively engaging with many different Australian musicians. These experiences have also influenced his musical appreciation, playing style and original compositions.

Ky Fisher has completed his Bachelor of Music in Contemporary Performance (Guitar), AIM, alongside other qualifications including certificates in Sound production and screen and media. He integrates his photography, filmmaking and music production skills into various projects, and has recorded and produced several CDs and videos for other musicians. He also has a keen interest in guitar technology, woodwork and electronics having a history of designing and making beautiful electric guitars.