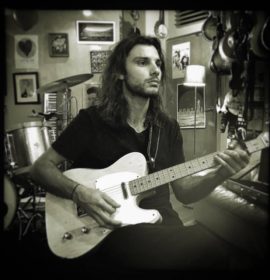 Teaching guitar and bass guitar in Ashfield in the inner west of Sydney. Daniel has a background in the blues, reggae, pop, soul and rock n roll. With over 7 years of experience in both teaching and playing live shows. Beginners are welcome! Lessons are from home in the Inner West area.

Graduate of the Australian Institute of Music, Daniel is best known for his musicality both in songwriting and guitar playing. At the age of 18 Daniel was nominated to play for the Australian troops in East Timor with the “Helen Barron Trio” a country/blues band that performed for thousands of the locals, receiving awards from The Australian Forces Entertainment. As well as performing in Sydney’s most well known venues such as Tokio Hotel, Blackbird, The Hard Rock Cafe, The Crane Hotel, The Art Lounge, Piano Room and many more, Daniel has been involved in charity work such as the “Kingston Family Fire Appeal” 2011 where he performed with a 10 piece reggae band to raise money for the effected families. Coming from a musical background, Daniel performs with his three sisters in both cover and original bands. Daniel is a well respected musician and loves the art of teaching.