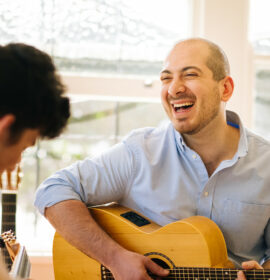 Guitar lessons in Kensington with Experienced Musician (All Ages).

Mark teaches in the Kensington area and is an incredibly passionate and enthusiastic musician and multi-instrumentalist. With 21 years of experience specialising in guitar and singing, Mark has travelled all over Sydney, interstate and internationally as, both a solo act and as part of multiple live acts. As a cover artist, Mark performs a collection of songs that were prominent in his upbringing; songs that inspired and helped shape him into the musician he is today. Drawing inspiration from artists such as Cat Stevens, James Taylor, John Mayer and Coldplay; Mark’s self-written music is imbued with a sense of lyrical substance, delicate melodies and expressive chords as he unravels personal experiences through songs and pieces.

The skills Mark has accrued over the years, as an active musician in Australia’s music scene, is channeled back into his other passion, teaching. With over 12 years experience teaching students of all ages and abilities, Mark has come to fully understand a students individuality and expectations as a guitarist and focuses on building the skills necessary to get them to that level as well as uncover other aspects of guitar they didn’t know existed.