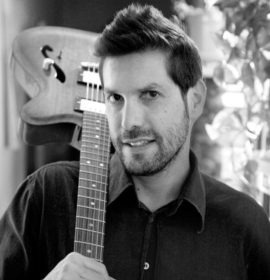 Douglas lives and teaches guitar on the northern beaches of Sydney and can do home visit lessons in all areas of Sydney.

Born in Brazil and became a Spanish citizen after living and getting involved with Madrid’s music scene Douglas studied at Villa Lobos Music Conservatory in São Paulo. In 2000 developed his technique and musicality practicing Flamenco guitar in Spain.

He has his children check.